Winnemucca, Nevada. Got here at 1:40 this afternoon. Disconcertingly, the exact amount of time Google Maps predicted how long it would take to get here. I left too early got here too early.  Checked into a Casino Hotel that I just picked by price (cheapest), with most Nevada-ish name (Winner’s Inn), from the Expedia site.

Smoky, weird dark Casino. Lots of furtiveness with the few daytime denizens. In fact, the whole place is at 2 percent capacity. I engaged the desk manager in conversation and she’s been at the job for four years, likes it and has made a career for herself.

“When’s the busy season?” I didn’t ask in fear she would say, “We’re having it.”

I worked for several years in Casinos in the mid-seventies, one job quite prestigious and very much a money maker. The manager who hired me, at the end of our conversation where he offered, and I accepted, the job said, “Remember, just don’t steal too much.” This was a major Casino.

I know the downside of this life of hustle very well. Actually there’s no upside, but you can’t tell that to many who are in it, because they are waiting for the big upside to manifest itself. It rarely does, and if it does, it’s a trick; which one finds out, or not.

So, to have this glancing encounter with tiny glimpses of a former existence is quite interesting and ultimately encouraging.

Anyway, the room is very comfortable and large with nice basic amenities. I would recommend it to anyone. The tricky part is the persistent air conditioner, it gets quite a work out in the Nevada Summer. The bug spray aroma in the room is comforting in an oddly reassuring way.

Winnemucca, is a bit of a time machine with lots of old folks, me included, who find  charming that old grubbiness and tawdry hustle of a small Nevada casino. They where the majority of the joints, with just a handful of standout shiny multi-story palaces in operation for most of the gambling saga of Nevada.

Ahh, the good old days, when a guy kindly advises you to not steal too much. Because if you got too greedy then everybody else who was stealing has to take a little less so the whole edifice can remain intact. Not being greedy was the way to look out for your co-workers.

Back then they didn’t have MBA’s they just said it like it was.

Morning at nearby temple,

Two towns over, by

Quiet today though, Creek, me,

All most silent, and quiet; and

Yet, there is some thing moving.

It leaves a trace of Its passage

In the ear and the heart. Here,

I sit watching. Some shady

By the pond; those cats

Are up, to something, I just

Know. I was schooled in the

In the city. Here comes one of them

Now. Trying to look all cool and

Yo, my name is Pancake,

I don’t know why you wanna

Call me that, but that’s cool; we

Got to start somewhere if I’m gonna

Jump all up in your lap and begin

My move outta that barn. Its alright

Now, but it does get cold in the Winter. 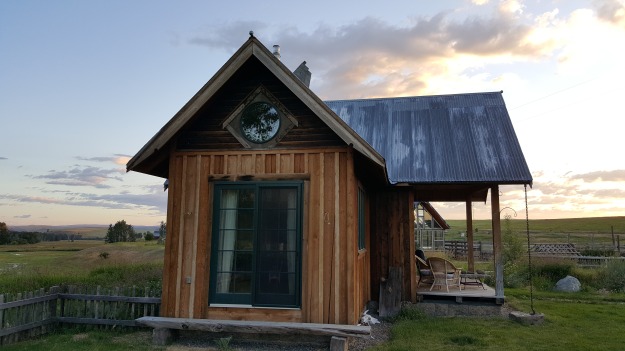 Have been very busy during June getting ready to move from costly crowded Bay area to low housing cost rural area in Northeastern Oregon.

I’ve rented a cabin on a small horse ranch run by a friend I made through the local Sangha a few years ago. I’ve got a warm tidy, nicely appointed cabin settled amidst horse pasture, corrals, barns, outbuildings, a green house, small pond and small stream/irrigation ditch that flows next (10 feet) to the cabin, It comes of the Wallowa’s and the Eagle Cap Wilderness area with over 30 mountains over 8000 feet just 15 miles away.

The difference between the Bay are and here is stunning.

I finally caught on to the fact that I had my priorities upside down. Rather than be uncomfortable in the Bay area (despite the many good friend),  and visit here; I could live here and visit There. Epiphanies can be quite common-sensical. I’m sure there will be a lot write about in this coming year and many changes in the offing, but I see it first and foremost, as a spiritual decision, and as practical, mental health-wise, and economically. Prudent all around, really.

I just got through with a great intensive retreat at Shasta Abbey led by one of our remote monks with whom I took refuge and became with, when we lived near each other in northern Idaho/Washington.

He was the monk I called when my wife, Linda, died 2 1/2 years ago. He came in the middle of the night driving through heavy snow for almost two hours, and then we did the ceremony for  a layperson who has died; he also presided over her cremation, and her memorial and, the public funeral ceremony. We have close ties. The retreat was very helpful as a sort of springboard for this transition. Geographically and internally

I’ll go to the Bay area again next week for two weeks and tidy up some loose ends and bring some more stuff and then become a resident of Oregon and all that entails.

I’ll have a better sense of things at some point and will keep more regular postings up.

Last week a resentment swarmed up the stick I was using to poke at all the little ways the world and the people in it were not behaving in ways that pleased me.

At first, of course, justifications took precedence and those lasted for a good couple of hours; then the niggle that perhaps I was wrong and not seeing clearly arose and that took a couple of days and a sleepless night to become apparent as true. I also had to do some things. Sit still. Examine. Open my heart. Be willing. Be teachable. Give myself the Dharma. Accept the teachings as they came. Two dreams. One, pulling a large wooden splinter out of my right eyeball with tweezers in the bathroom mirror. The other, walking next to my teacher, and he, uncharacteristically, putting his hand around my shoulder as we walked and I felt only Love being transmitted.

He was one of the objects of my resentment because sometimes I don’t like the way he does things.

Almost twenty years of my accepting (haltingly and with bristling, carping and grousing at various times), this student/teacher- master/disciple intention experiment (“We’ll see how it goes…”) and having to remember my part. To examine, to accept; to make the teaching true for myself. That truth which transcends teacher and student, peasant and sage; and does not stand against itself.

My former father-in-law, a true Irish self-made-man, Joe L. used to say “You can’t have it every-which-way!” The truth.

Anyway, it takes what it takes and I have to remember that “one should always be disturbed by the truth”, because otherwise it’s just an agreement between what I know, what I think I know, and how the world appears in relation to all that, to me. Dead end.

Resistance is a many-headed dragon. It doesn’t need slaying, just some good nourishment and a safe place to rest and enough comfy pillows for all its heads. Luckily I have Resistance Whisperers in my life.